TVR’s origins lie with TreVoR Wilkinson who in 1947 built his first "special" in Blackpool, England. A few years later he adopted the marque name TVR and small scale series production of sportscars commenced in the early 1950s. The recipe of two seater fibreglass bodies on a multi-tubular steel backbone chassis was one that has remained with TVR to this day.

From a business perspective, building TVRs in the 1950s and 1960s was a far from sound proposition. Several companies were involved in building the various TVR models during this period and bankruptcy struck on more than one occasion. When Grantura Engineering Ltd went into liquidation in 1965 Arthur and Martin Lilley bought the company founding a new TVR Engineering Ltd in November of that year. It is here that the M-Series story originated. The Lilleys turned the fortunes of TVR around over the next few years mainly by improving and evolving the models that they had inherited. However by the end of the 1960s they were ready to launch a completely new chassis/body combination which was to form the basis of all TVRs for the following decade.

The M-Series made its’ public debut at the 1971 Earl’s Court Motor Show where a 2500M graced the stand. A new, longer two seater fixed head coupé body was evident but the key innovation was the new chassis. This had been developed by Mike Bigland, TVR’s Technical Director, with the aims of eliminating some of the problems of the old chassis whilst facilitating the fabrication process in production. As always a multi-tubular backbone design was adopted but using a certain number of square section tubes for the first time. New wishbones and rear hub carriers were designed whilst the front uprights and brakes were "borrowed" from the TR6. 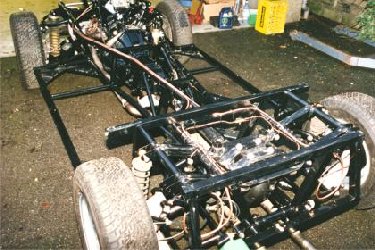 Three engine versions were available initially for the M-Series: the 1600M (Ford Kent 1.6 litre), the 2500M (Triumph 2.5 litre) and the 3000M (Ford Essex 3 litre). In September 1975 a Broadspeed turbo-charged version of the 3 litre engine became available and a total of 63 M-Series Turbos were ultimately built

. Four Special Equipment Turbos were built, sporting flared wheel arches, split rim Compomotive wheels, air conditioning and a leather interior. Three of these were Taimars and one a convertible, which was Martin Lilley’s personal car for some time

A number of M-Series cars were raced successfully in the UK. Chris Alford enjoyed success with a 1600M in Prodsports racing and Chris Meek was 1979 CAV-BRSCC champion with the same car. Colin Blower took the 1980 BRDC Prodsports championship in a 3000S with 22 outright race wins.

M-Series production was discontinued at the end of 1979 to make way for the new Tasmin body/chassis combination. Approximately 2500 M-Series cars had been built.